What drives master pianist Hannes Minnaar? "I have great ideals and I want to grab the listener by the throat, as it were. It is beautiful when you feel that a certain atmosphere is created, when the music rises above yourself. 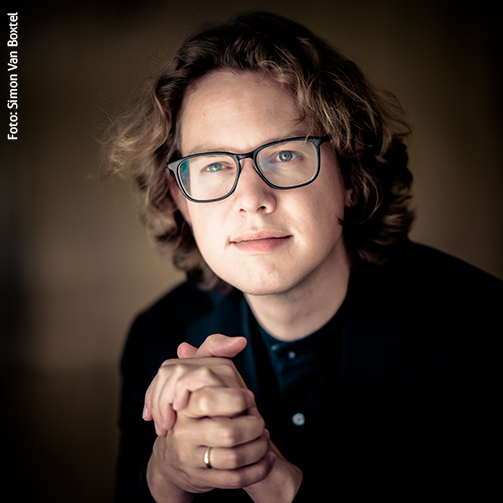 Secrets of the night

The words subdued and intense are also applicable to the music that Hannes Minnaar plays in the Edesche Concertzaal. With pieces by Schumann, Fauré, Ravel and the Dutch composer Robert Zuidam, Hannes Minnaar leads us through the secrets of the night. Schumann takes you to the depths with his 'Nachtstücke'. He composed the work around the death of his elder brother Eduard. A period in which Schumann himself said he was obsessed with death. At first glance, Fauré's Nocturnes sound very pure and serene, but nothing is what it seems. "Under the surface, there are definitely feelings hidden", Hannes Minnaar knows.

Ravel's expressive Gaspard de la nuit is one of the most challenging piano pieces in the history of music. Ravel took three poems by the poet Aloysius Bertrand as his starting point. Like a true master of sound, Ravel paints the fairytale water nymph Ondine, a sinister gallows and the ghostly spirit Scarbo.

Robert Zuidam is also fascinated by the night. The composer claims to be a real nocturnal animal and prefers to work at night: "You have more freedom and the phone doesn't ring", he says in an interview. In the piano piece Nox, you can hear Zuidam's nocturnal experiences. The piece begins with 'Nightfall', the moment when evening falls. With the intense, restless notes of 'Insomnia', the composer seems unable to fall asleep. L'Heure Bleu' is Southam's tribute to that magical moment just before sunrise, when the world is bathed in a bluish glow. The final piece is 'Perseids Passing', the meteor swarm you can see in the sky during summer nights.

Rob Zuidam's Nox is an ode to the night. The composer says he is a nocturnal animal and prefers to work at night. "You have more freedom and the phone doesn't ring," he says in an interview. Four of the five movements of Nox are inspired by night experiences: nightfall, insomnia, the blue hour (the moment just before sunrise) and the Perseid meteor shower that can be seen in the sky during summer nights. The fourth part, 'Farewell to Reinbert at Zorgvlied', is an in memoriam for the conductor and composer Reinbert de Leeuw, who died in 2020.

Gaspard de la nuit has long been the most difficult piano piece to play in music history. But that is only a minor consideration when listening to the music. In three catchy atmospheric images, Ravel paints an evil water spirit, an eerie gallows and a dwarf spinning around.

Schumann's Nachtstücke have a personal ring to them. Schumann composed them in the aftermath of the death of his older brother Eduard. It was a dark period for Schumann, who said he was obsessed with death. At the same time, Schumann incorporated subtle references to a collection of short stories entitled Nachtstücke by Schumann's favourite author E.T.A. Hoffmann.