Known and well-liked. Violinist Judith Steenbrink and harpsichordist Tineke Steenbrink, as founders of the highly successful Holland Baroque, are proud winners of the 2017 Edison Audience Award. In the Edesche Concertzaal you will hear the twin sisters Steenbrink as a seasoned duo. With Bach's sonatas for violin and harpsichord they climb the highest peaks in the landscape of Baroque chamber music.

Beach's Six Sonatas for harpsichord and violin are something special. In their violin sonatas, Bach's fellow composers often chose to give the violin the main role with support from accompanying instruments. In his violin sonatas, however, Bach broke new ground. He turned them into real trio sonatas, in which the three parts (violin, right hand and left hand harpsichord) are completely equal to each other. The result is music that sounds like a lively conversation, in which the violin and harpsichord constantly react to one another. In this way the composer is able to create a unique piece of music. 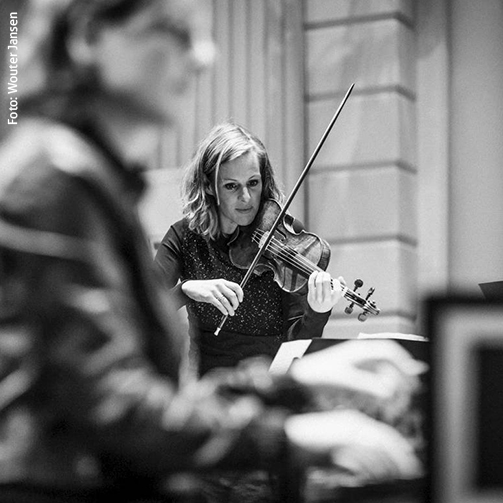 Judith Steenbrink on the baroque:
"The baroque is our alpha and omega: everything we play and make harks back to the principles of eighteenth-century baroque music. The meaning of keys, the theory of affections, the opulence of the rich continuo setting: you can wake us up at night for it."
(Read the interview with Judith Steenbrink.)

Besides music by Bach's father, Judith and Tineke Steenbrink also play music by Bach's most famous son, Carl Philipp Emanuel Bach. We hear two of his violin sonatas, one of which was also composed by father Bach. We will also hear pieces by father Bach's good friend Georg Philipp Telemann. Judith and Tineke Steenbrink will play his infectiously cheerful Violin Sonata no. 11 by the French composer Jean-Fery Rebel.

Listen to Tineke and Judith Steenbrink together with their ensemble Holland Baroque.

For a long time musicologists thought this violin sonata was by Johann Sebastian Bach. The piece even received its own number in father Bach's list of works (BWV 1036). Three quarters of a century ago the mystery was solved. Carl Philipp Emanuel wrote this sonata together with his father. This is why the piece still sounds so baroque. Later, Carl Philipp Emanuel turned it into a trio sonata for flute and violin. Judith and Tineke play the original version.

Sonata for violin and basso continuo in G, BWV 1021

Unlike the famous violin sonatas BWV 1014-1019, Bach wrote this sonata for violin and basso continuo. Only the violin and bass parts are written out. The harpsichordist fills in the accompaniment himself, using numbers that Bach wrote under the bass part. This was customary in the Baroque era. Bach probably wrote this violin sonata while working in Cöthen and Weimar (1715-1720).

Bach's Violin Sonatas BWV 1014 and BWV 1018 are each four-movement pieces with a slow, a fast, a slow and finally a fast movement. This form is also known as 'sonata a chiesa' (church sonata). Bach wrote them between 1720 and 1723, when he was Kapellmeister at the court in Cöthen.